The cyclical fluctuation of female hormones is crucial to the very existence of human life. The variation of these patterns is what causes women to release an egg every month and enables them to ultimately bear children. On the flip side of the coin are period pains, breast tenderness, bloating and mood changes, which rear their ugly heads due to subtle shifts in the hormonal cycle. In some women the situation is magnified and made more complicated by conditions such Endometriosis. In this blog we will discuss PMS, painful periods, and how severe menstrual cramps could point to a more serious underlying condition. 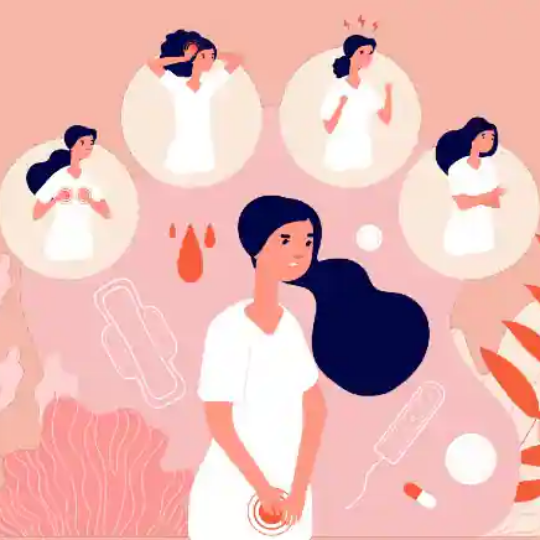 The Red Haze…. PMS or Premenstrual Syndrome can give rise to distressing psychological and physical symptoms, which usually occur a few to several days before the period. Physical symptoms include headaches, breast tenderness, bloating and weight gain, joint pains, back pain, skin problems and swelling of the hands and feet. Many women report feeling dejected and down, also displaying other psychological symptoms such as feeling irritable, angry, hopeless, anxious, and having poor concentration and disturbed sleep. Symptoms can be debilitating, with up to 10% of women reporting them as severe, and 13% of women having to take time off work. And let’s not forget period pains. No one knows exactly why periods are painful, but it’s thought to be linked to a group of fatty molecules known as prostaglandins, which act on the muscle in the wall of the uterus causing it to contract more. Typically the pain starts 24 hrs before the period, lasts 2-3 days and is felt in the lower abdomen, back and thighs. The Storm before the Calm…. The cause of PMS is thought to be due to a combination of certain women being more sensitive to the female hormone progesterone and also due to the effects of this hormone and also oestrogen on the serotonin and GABAA receptors in the brain. These receptors are thought to regulate mood and cognition. Could CBD help with PMS? Evidence suggests that CBD can alleviate pain and modulate pain pathways (1). This leads us to believe that it could improve symptoms in PMS, however further research and clarification is needed. A review from Frontiers of Immunology suggests that cannabidiol (CBD) could help protect nerve cells which could stabilise mood (2) As we know, irritability, anxiety and depression can all be symptoms of PMS. An article published in the Neurotherapeutics journal noted that CBD might have anti-inflammatory, anti-anxiety, and sleep-promoting effects (3). Joint pains and insomnia are common symptoms of PMS. Lifting the Red Haze…. There are other ways to improve the situation… Lifestyle measures such as exercise and taking certain supplements such as Vitamin B6 may be enough to improve symptoms for some. The Combined Oral Contraceptive Pill (COCP) can be very effective at reducing both the physical and psychological symptoms and usually have the added benefit of making periods lighter and less painful. These can be taken with or without a break. SSRIs or Selective Serotonin Receptor Inhibitor are a type of antidepressant that work by increasing levels of serotonin, the ‘feel good hormone’. This can be taken on a continuous basis or on just during the second half of your cycle. These medications need to be prescribed your GP who will need to discuss their risks and possible side effects. In addition, if these treatments do not work they may be able to discuss other options or refer you to a Gynaecologist. What is Endometriosis? This is a condition whereby pockets of the womb lining are found in areas outside of the womb. 85 % of women report very painful periods, which were not characteristically painful when they first started. Other symptoms include pain during intercourse, heavy menstrual bleeding, spotting before and after periods and chronic pelvic pain How do I know if I have it? A Gynaecologist makes the diagnosis by performing a keyhole examination of your pelvis. Other tests such as an Ultrasound may also help with the diagnosis. See your GP if you have any of the above symptoms so that they can get the process started. Can CBD Help? A recent study of 484 Australian women has shown that cannabis , hemp/CBD oil used in conjunction with dietary changes and heat therapy were the most highly rated self -management strategies to reduce pain. (4) Medical Marijuana and Chronic Pain: a Review of Basic Science and Clinical Evidence Jensen B, Chen J, Furnish T, Wallace M. Curr Pain Headache Rep. 2015 Oct;19(10):50. doi: 10.1007/s11916-015-0524-x. Crippa, J. A., Guimarães, F. S., Campos, A. C., & Zuardi, A. W. (2018). Translational Investigation of the Therapeutic Potential of Cannabidiol (CBD): Toward a New Age. Frontiers in immunology, 9, 2009. Blessing, E. M., Steenkamp, M. M., Manzanares, J., & Marmar, C. R. (2015). Cannabidiol as a Potential Treatment for Anxiety Disorders. Neurotherapeutics : the journal of the American Society for Experimental NeuroTherapeutics, 12(4), 825–836 Self-management strategies amongst Australian women with endometriosis: a national online survey. Mike Armour 1, Justin Sinclair 2, K Jane Chalmers 3, Caroline A Smith 2 BMC Complement Altern Med 2019 Jan 15;19(1):17. doi: 10.1186/s12906-019-2431-x.